Since moving to Ho Chi Minh City last April, I’ve been very keen to get out and explore the city and discover some of its many secrets. I’m not one for mainstream tours, so I’ve been developing a series of self-guided walking tours that pick up points of interest in a logical progression. I’ve published Day 1 that touches on the main tourist spots and Day 2 that goes a little further. Day 3 which explores the OTHER end of District 1 and Day 4 that gets down into China Town are coming soon. 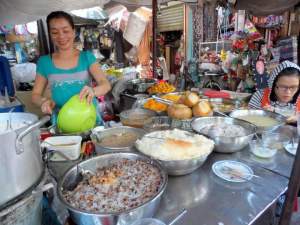 An array of Cambodian desserts……

The biggest issues I have with heading out by myself is that I’m sure I misinterpret some things, and that could create issues for my readers. It would also be nice to share my discoveries with someone else. Tim rarely comes with me for a number of reasons, so it’s mostly a one-woman show. Last week I tapped into a local group that solves both those issues. A friend here in the city had mentioned a group call Saigon Hotpot who is a group of volunteers that among their good deeds, provide a volunteer guide service. I thought it worth a look. I figured it couldn’t hurt as their tag line is:

“Your smile is our success.”

Before I signed up I dug a little deeper. Take a look at their website, and their reviews on Trip Advisor and you start to be impressed. Saigon Hotpot has been around since 2006. It’s a voluntary club run by Vietnamese students from different universities around town. Their aim is:

“to promote the beauty of Vietnam to the world and create a dynamic environment for self-development of the local students”.

You can read the rest of their mission and core values here. But in a nutshell, they want to interact with and understand other cultures and practice their language skills while promoting the awesomeness of Ho Chi Minh City. A bit like me really.

I must admit I was still a little sceptical when I decided I’d book a tour. I live by the adage, “ nothing in life is FREE.” I’d love you to keep reading but just in case you’re stretched for time, here’s the drum right now. Hand on my heart, scout’s honour tell you that these guys are a totally legit, straight up, dinky di, 100% free service. No strings attached. No dodgy shopping trips where they earn a commission on everything you are pressured to buy, no hinting for a tip at the end and no ulterior motive. There are some expenses you will incur during your outing. However, each one is entirely dependent on what YOU want to do and see and how you choose to get around. AND …They do support a worthwhile charity, but YOU ARE UNDER NO PRESSURE whatsoever to donate.  They simply “ provide an opportunity that can benefit both Vietnamese students and a range of foreign tourists, as well as improving the cultural exchange between Vietnam and the world.” 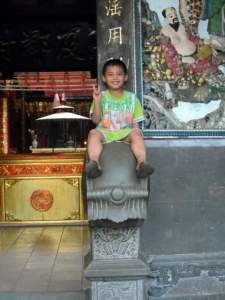 I contacted the guys through their website and picked a tour. I hadn’t done much exploring in District 5 and China town yet so I chose the Cho Lon option, but I mentioned in the notes that I live here and I was as interested in finding out how the group worked and what they were trying to achieve as actually doing the tour.

I met Tram, my partner for the day, at Independence Palace, and we quickly decided we weren’t going to do the usual hotspots in that area. We popped over to a local café for coffee while we discussed how the day would pan out. Tram quickly clued into my needs and suggested (without my prompting) a list of things I’d been meaning to get to in the western part of the CITY. We would take local buses to get places, but most of our day would be on foot. And, in alignment with my mission of discovering new tastes we’d try out some of the street food I haven’t got around to yet. We also worked in lunch with my hubby and a friend from Hong Kong at a unique local restaurant serving homemade cuisine. I would never have found it myself.

We jumped on the bus (5000 VND/25c) and headed into District 5 and headed off into District 5. Our first delectable delight was a stop at the Cambodian dessert vendor. Think pumpkin stuffed with a creamy custard, with just a hint of Durian (pumpkin flan), sweet beans and egg custards. Despite a number of food tours around town and multiple market visits, I had never seen many of them. The stall was extremely popular with locals of all ages, and we had about ten people crowded around the tiny stall at one stage with others clambering for takeaways. I guess it was morning tea time. A couple of large dishes cost 25 000 VND (1.25) 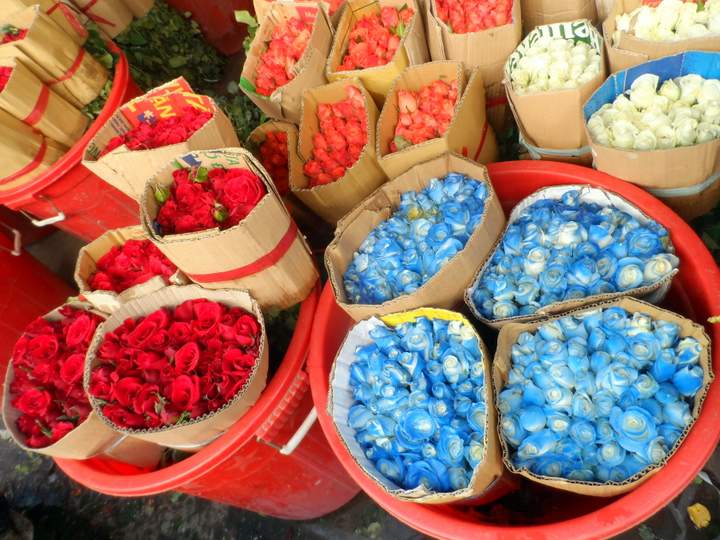 We headed off into the nearby Flower Market (Hồ Thị Kỉ Market) in District 10. Some locals had told me that the vendors here weren’t all that ” tourist friendly” so I’d not come down before. It was “Teacher’s Day” day so many of the arrangements were dedicated to that. The range of beautiful blooms was stunning, and I wondered at how the hell they survived in the heat and humidity. They all come from much cooler climes in the hills of Dalat. The market is also referred to as “ Little Da Lat in Saigon” by many locals. If you want flowers for any reason, this is the place to come, A large bunch of perfect red roses are just 50 000 VND (less than $2.50). Whilst not over friendly there didn’t appear to be any hostility against us. We were simply a non-event as we were obviously not in the market for large purchases (Tram did, however, buy me a rose for Teachers Day, which was very sweet. (I am an English Teacher by the way) 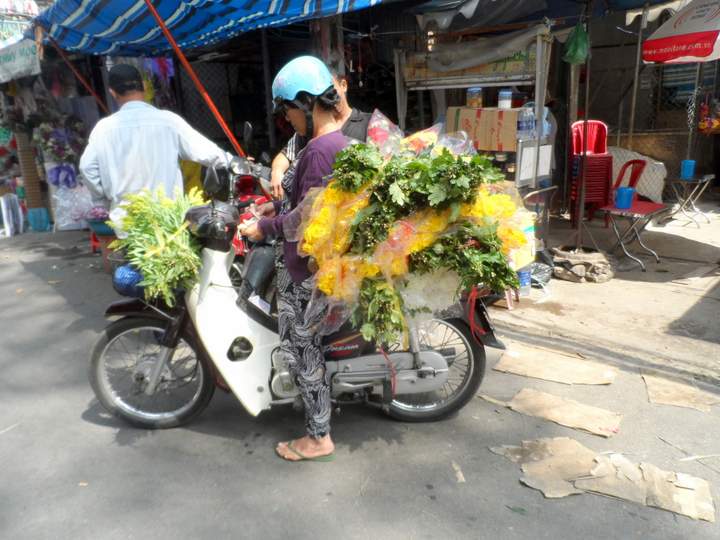 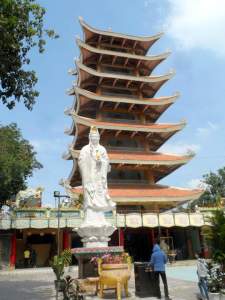 We dropped off into a local Buddhist Temple (Vietnam Quoc Tu Pagoda)before heading off to the FITO museum (Museum of Traditional Medicine. (Entry – 50 000VND $2.50)). This place is worth a visit just to see the building itself. A beautiful old style wooden building filled with ornate carvings and impressive displays. We didn’t need a guide as Tram knew all the info, and it was fascinating the connection with Vietnamese culture.

From there, we headed back to D1 to meet up with Tim and our friend. We would have taken a bus, but I needed to drop something off so grabbed a cab. Otherwise, it would have been another 5000 VND. Tram then took us to a well-hidden restaurant,  right in the centre of town that served Homemade meals. It’s the kind of food a Vietnamese mum would make for her nearest and dearest. Very simple but delicious. It’s a unique place as it only has one main course on the menu, and this doesn’t change for a whole week. Bottom line; it was superb. Tram’s English was so good that she freely joined in with our conversation. We were so comfortable we stayed for over 2 hours!!! 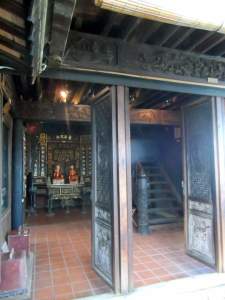 Stunning architecture at the Fito Museum

We said goodbye to the others and Tram and I headed back into District 5 on the bus (5000 VND). It was easy to spend another 2 hours exploring Ben Tay market, Ong Bon Pagoda and then a street full of vendors that change their wares according to the season. At this moment in time, they’re decked out with Santa Clause and tinsel which was kinda cute but I suspect they’ve only just removed the skeletons and pumpkins for Halloween.

The whole day had been fantastic. I felt like I’d been out with a friend. Having Tram with me opened my eyes to a whole raft of things I hadn’t seen before and hadn’t been quite brave enough to try. The only money I spent was on things I would have paid for anyway and, I quite possibly got a few things cheaper because she was with me. Tram was so considerate, and I had to smile at some of the little things that made the day special.  I’ve been living here a while, and I’m quite accustomed to the crazy Ho Chi Minh Traffic. Even knowing that, she ushered me across busy streets as though she was looking after one of her family. She also took great delight in helping me with my atrocious Vietnamese pronunciation, and I do believe I learned something.

At the end of the day, I tried to offer Tram a tip. She steadfastly refused until I reneged. I then offered it to their charity, and she accepted on the proviso I email the office and confirm she had handed it in. 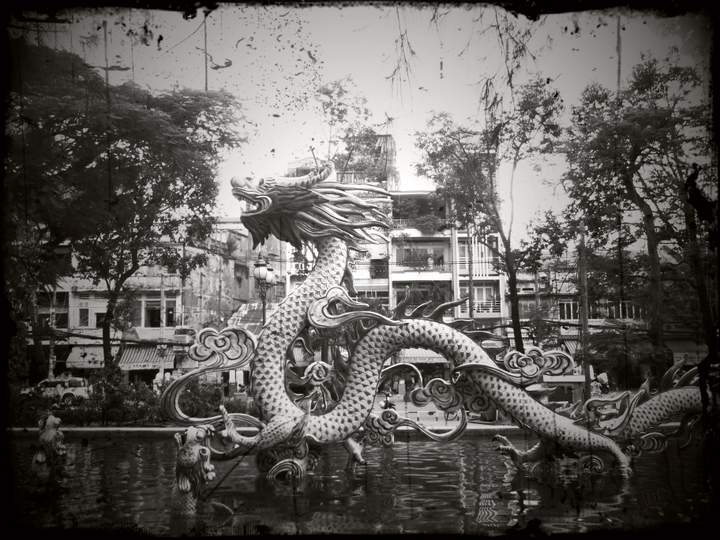 District 5 has a large Chinese influence

Ho Chi Minh City has a bit of a bad rap because of some of the pushy vendors and dodgy tours that are badly disguised as enforced shopping trips. Many guides, on cheaper outings, are paid poorly and rely on commissions from shops to make their living. There’s also a  quite a few transport scams by overcharging taxis and Xe Oms. It’s part of the reason I’m developing the self-guided walks and choosing the tours I recommend very carefully. But having been out with Tram and learning about Saigon Hotpot I can see that there’s another option for visitors to Saigon. 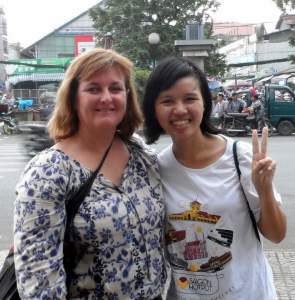 If you aren’t into big group tours and want to explore by yourself, Saigon Hotpot can enhance that experience. By providing a local connection that will allow you to dig deeper under the surface of this fascinating city you’ll see more and gain a more authentic experience. If you aren’t confident to get out and explore by yourself then, the guys will help out by removing language, logistical and cultural barriers. If you are part of a larger group, (up to 13 people) Saigon Hotpot will send two guides. Personally think that a small group is more fun and easier as some parts of the city are crowded, and you’ll just be tripping over one another.

So perhaps by now you have conflicting feelings. How can you possibly take advantage of this great service without giving something in return? Well, first up, you already have by taking the tour. You’ve exchanged language skills and cultural aspects and hopefully will tell your family and friends about how amazing Ho Chi Minh City is. Secondly, you can give to their charity, Sky Lantern, which supports needy children in the countryside. There is no pressure to do this and no restrictions on how much you should give. You can pass it onto the guide and check that they’ve given it in via email or give online here. I’ll let your experience with the tour and your conscience guide you on that.

Saigon Hotpot also has a number of partners in other parts of Vietnam.

Explore the World with Intrepid